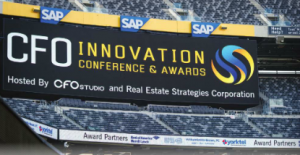 There was a hum of business networking and a buzz of anticipation inside MetLife Stadium as early as 7 a.m. on May 12, 2015. Entering at the Bud Light Gate were not the usual football fans, but participants in the CFO Innovation Conference and Awards. This was the first-ever such conference, and financial executives from around the region came to get ideas, refine their thinking, share their insights on panels, shake hands with friends and business associates, find new vendors, earn CPE credits, and — for 49 who’d been named finalists — potentially take home a CFO Innovation Award.

CFOs in the Digital Age: The conference kickoff session, presented by Mike Hipps, senior director of sales consulting for Oracle, and a former finance executive himself, reported on best practices of CFOs in the modern age. He described technology-enabled, timesaving tactics such as the capability to embed an active link in a PowerPoint presentation that connects to a spreadsheet and automatically updates the presentation throughout the quarter. Early adopters are using that and other examples of business apps with a social media aspect both to collaborate and to refine databases and documents. 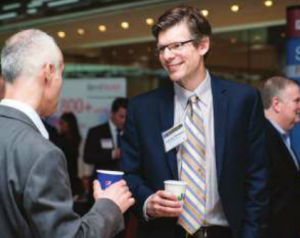 “We believe the CFOs of today are taking on the role of general counsel for data,” Hipps said, describing a better world — that is possible today —where the technology enables CFOs to control the content through adjustments and iterations so that “you are providing the appropriate governance … [and] everyone knows you’ve blessed the data.”

Turning to cloud technology, Hipps said, “We’re seeing [CFOs] take on more of a modular-based implementation.” He described ways that cloud-based apps are speeding decision-making among dispersed teams and how that technology transforms finance departments, moving them to a touchless payment process. He spoke of project-centric businesses using apps to stay on top of staffing and resourcing their projects, no matter who is traveling and where the project is based.

Finally, he described ROI’s newest wrinkle. “Today you have to look at the social capability. The relevant question now is, ‘If I approach the marketplace on a social-media, digital basis, how is that going to change my business?’” CFOs are the best suited to do this analysis and to appreciate the impact this evolution will have on the business, he said.

Panels on six topics were well attended, including one with a small-company focus, and two for which CPE credits were provided. Meanwhile, there was networking along CFO Boulevard, where suppliers and service companies demonstrated new ideas and greeted CFOs. Included were Alliance Cost Containment, a company that seeks out and delivers savings in 35 categories; The Alliance Group, providing workers’ compensation and business insurance; BDO, accounting, audit, and tax services; Jarmel Kizel architects and engineers; the ReedSmith law firm; Robert Half professional staffing; and Yorktel, which provides integrated voice, data, and video communications solutions. 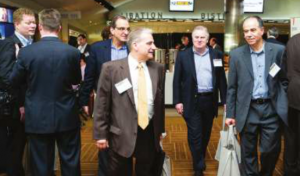 Managing Thousands of Fans: A panel on the business of sports franchises was the right topic at the right time in the right place. Held immediately after lunch, this general session moderated by Robert Raiola, sports and entertainment group manager for public accounting firm O’Connor Davies, drew a rapt audience to hear David Denenberg, senior vice president, global media distribution and business affairs of the NBA; Brian Friedman, CFO of the New York Jets; and Charlie Mierswa, executive vice president of business operations and CFO of the Brooklyn Nets.

Both Mierswa and Friedman described high-pressure jobs during the playing season and a more relaxed off-season. “I feel like the NFL season is comparable to dog years,” said Friedman. “It is such an intense period.”

The in-season/off-season divide means cash flow is irregular, but, said Friedman, “The NFL has television contracts and there’s a certain consistency to the cash flow with that.” Sponsorships, too, contribute revenue that’s not tied to the playing season.

“The nice thing about the off-season is we begin selling for the next season, so I’m really only ever exposed for a half-season’s cash flow,” said Mierswa.

The panel discussed branding in the context of the transformation of the New Jersey Nets to the Brooklyn Nets. “We didn’t just transfer the brand. We created a new fan base in Brooklyn,” said Mierswa. He described an “emotional buildup” for fans and potential fans, achieved by unveiling elements of the Brooklyn Nets brand bit by bit. He said the team kept 15–20 percent of prior fans.

Denenberg said that social media “gives you that one-to-one relationship with fans, and when you reply directly to that fan and explain the rationale for the policy, it does a world of good.” But he and Mierswa both mentioned, no one has figured out yet how to monetize a social media strategy. 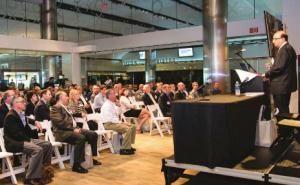 All told, the audience got insights into three big-name sports franchises that they’d never have heard on sports radio or ESPN.

Nine hour-long panels were held in the afternoon time slot. Included were discussions on running not-for-profits, machine-to-machine technologies, and financing growth. Three others provided CPE credits: “The evolving role of the CFO,” for example, presented by Bank of America Merrill Lynch.

Piranha Tank: Like a certain hit NBC TV show, “Piranha Tank” gave the stage to ambitious entrepreneurs at early-stage companies who had the opportunity to pitch their startups to a panel of private equity and angel investors. The seasoned investors then took turns asking the tough questions to uncover the true value and viability of each new business. The panel was moderated by Greg Kammerer, VP of capital markets at MLG Capital. The three piranhas were Katherine O’Neill, executive director of JumpStart New Jersey Angel Network; Gil Beyda, founder and managing partner of Gencast Ventures; and Stephan A. Leccese, partner at TechCXO.

The entrepreneurs seeking capital had five minutes to describe their innovative technologies and explain how their products were game changing, and— importantly—how their business models were viable. Tad Slaff, CEOof Inovance, described his company’s investment strategy research tool, which can discover patterns in big data to help stock traders analyze and develop investment strategies more efficiently and more accurately.

Kevin Strom, founder of GlobeChat, pitched his company’s social tech innovation, a global communication platform that can seamlessly connect people regardless of language.

Mihai Dinulescu, chief business officer of Brain Backups, has developed with colleagues a tool that is 1,000 times more accurate than today’s MRI, he said. The goal is to map every connection in the human brain. This technology could help researchers make significant advances in treating neurological diseases such as Parkinson’s.

Andrew Amann, founder, Inigo, described his company’s digital business card app. Users can design and send their business card digitally, check to see if the card has been opened and what information on it the recipient clicked, allowing businesspeople to discover which of their leads are viable.

The winner of the Piranha Tank segment, announced at dinner that evening, was Inigo, and a jubilant Amann took home a plaque commemorating his day with the piranhas.

Conversation flowed among attendees and guests at the Wine Reception. Excitement built as the hour got closer to 6:15, when the doors would open onto the football field for dinner and the CFO Innovation Awards ceremony. 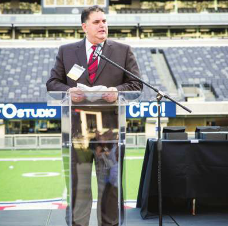 Under cloudless skies on a perfect May evening, 442 attendees and guests took seats for dinner on the 50-yard line of MetLife Stadium. A few moments thereafter, Andrew Zezas, the host and emcee, called up the 49 finalists for CFO Innovation Awards. Winners, whose entries had been vetted by CFO Studio’s audit partner, WithumSmith+Brown, and which were then judged by an independent panel headed by Tim Anglim, president, YesCFO, each received an engraved award. 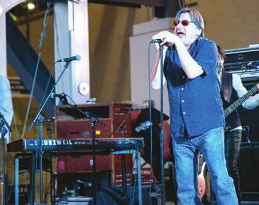 Buoyed by the sense that a day focused on the exchange of thought-provoking ideas had been capped by a celebratory event in an exciting new stadium where few, if any, ever expected to set foot, the attendees made their way off the field. They congregated at the Bud Light Stage, where Southside Johnny and the Asbury Jukes played hit after hit, and then brought a special guest up to perform with them. Despite the long, yet exhilarating day, wearing dark glasses, a black shirt, and jeans, none other than Andrew Zezas, publisher of CFO Studio, showed that he could more than hold his own singing next to Southside Johnny himself, in the style of the legendary South Jersey band. What a party! What a day! What a night!