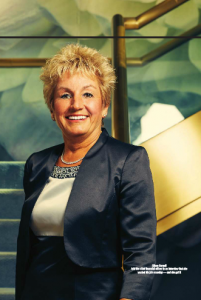 ON A WELL-DESIGNED CAREER PATH, A FINANCE EXECUTIVE MAKES SMART CHOICES TO CONTROL HER FUTURE – BUT ENCOUNTERS AN UNEXPECTED TWIST

There’s an irony at the top of the Finance ladder, as Alison Cornell learned two years ago. Up to that time, in an almost 30-year career, she had been steadily accumulating the skill set and accomplishments she would need to hold a CFO position at a publicly traded company — a role where she envisioned herself advising and guiding the CEO, joining in counsel with the board and investors, and being a top — if not the top — valued member of the corporate decision-making team. When she reached that culminating moment, the surprise was finding that there’s another horizon beyond.

Starting as an AT&T intern in 1983 and progressing through roles with increased scope and responsibility (moving to a different position approximately every two years), Cornell ultimately achieved the title of AT&T’s Financial Vice President, Forecasting Performance & Investment Analysis, a leadership role for a $30 billion business unit. There, she was actively involved in helping the AT&T leadership team realize cumulative savings of over $3 billion between 1999 and 2003, by identifying and implementing a series of recommendations to reduce operating deficiencies and associated costs and to streamline processes.

Then, after almost two decades in Finance at AT&T, Cornell left to pursue her dream of securing a position as the CFO of a publicly traded company.

It took about one year and 75 interviews to find the right opportunity. During that time (2003– 4), Cornell achieved her Certified Treasury Professional designation, a Six Sigma Green Belt, and helped her cocker spaniel puppy become a show dog. (No slouch himself, Cornell’s cocker spaniel went on to attain his Championship and then receive an Award of Merit at Westminster the following year.) Then, while interviewing for the job of VP, Finance – Late Stage Development Services at drug-development services organization Covance, Cornell told that company’s CFO that her goal was to have his job someday —which she secured eight years later, in 2012. (“As it happened, they were looking for a potential succession candidate for that role,” she says. “It was somewhat serendipitous.”)

But barely two years after she’d achieved that career goal, as she was in the midst of considering the merits of executing an acquisition — the target having been chosen — or doing a share buyback, a suitor from North Carolina, LabCorp, approached, and made an offer for the Princeton, NJ–based Covance.

It fell to Cornell, the Corporate Senior Vice President and CFO, in a tense roughly month-long period in the fourth quarter of 2014, to give the LabCorp team a thorough enough understanding of Covance financials so LabCorp could do its own financial modeling. What she needed at her fingertips was not just the current and forecasted numbers for eight business units, but “what’s going on in each of the different markets.”

On November 2, LabCorp entered into a definitive agreement to acquire Covance, and in February 2015, in a $5.7 billion transaction, completed that acquisition.

“What really became pronounced were the principles of duty of loyalty and duty of care that the Board takes in making all decisions in their capacities as Corporate fiduciaries,” Cornell says. “It was up to me to present the best set of information possible, a comprehensive set of analytics, so that the Board could weigh everything possible to make the right choice. My job became informative.”

She knew, of course, that there was a likelihood that the acquiring company wouldn’t keep her as CFO, and yet she immersed herself in gathering research and information to facilitate the decision. And so in her last weeks as Covance CFO, “The role pivoted,” Cornell says. “It became more about helping [the board members] do their best job.”

Reputation as a Go-to Person

Cornell has always used her positions to make a meaningful impact. When she was at AT&T, as CFO of the Business Network Services unit, she delved into the sales figures, so the company could understand its customer-level profitability, then introduced a sales-contribution model, and linked that to the business plan. “It changed the way we ran the sales force,” she says.

In the late 1980s when AT&T sold computers, she was forecast manager for the marketing and sales operations in the Data Systems group. She noticed that inaccurate demand forecasts, based on sales projections, were hurting profitability, because they were used for manufacturing. She developed a forecasting process after gaining an understanding of what the right drivers were, and “we increased our forecast accuracy to 99 percent.”

At Covance, she spearheaded a project to significantly improve profitability and Days Sales Outstanding (DSOs) for the Late Stage Development unit.

In 2015 Cornell received the prestigious CFO Innovation award from CFO Studio, having been selected by an independent panel of judges. Her noteworthy achievement was introducing a “cash neutral” approach that convinced Covance’s drug development customers to provide advances, a practice that was not the customary standard for the clinical trials the company managed for them.

The cash neutral plan was radical, and might not have occurred to an industry insider. “Sometimes it’s helpful not to be from the industry, as you have a fresh perspective and don’t take things as a given,” says Cornell, who sold the idea to customers on the merits of its fairness. “If you have a conversation with a businessperson that essentially says we should get paid for the work when we do it, it’s very hard [for them] to argue, especially someone who’s your customer and wants you to be successful [in delivering services to them],” she says. “[The plan] essentially laid out the math and showed them that absent the advance, we would have been “in the hole” for the trial cash-wise. With the advance, we were just neutral.” Industry practice changed as a result, she says.

“For me, it’s all about making a difference wherever you are. And every day,” says Cornell. When she wasn’t driving the Finance agenda, she was the Executive Sponsor to a maternal and infant health program sponsored by the Covance Charitable Foundation and operated by CARE Nepal, which established 15 birthing centers and five school bathrooms within the poorest regions of Nepal.

With verve and solid accomplishments, she has navigated a career path through three diverse industries, her most recent CFO post being at a multinational firm in the chemical/ consumer products industry. She leveraged her past experience and expertise, taking up several initiatives including obtaining 500 million Euro Bond financing at a substantially lower rate, and identifying opportunities to build upon her Finance organization’s strengths.

“Each industry and company has a culture of its own,” she says. “You need to be adaptable while maintaining your authenticity.”

Raised in Sayreville, NJ, the daughter of an Army major and a stay-at-home mom, Cornell amassed extra-credit points and predominately straight A’s all through school — receiving her undergraduate Psychology and MBA degrees at Rutgers University — both with honors. Approaching college graduation, she had an internship at AT&T’s Center for Education and Training, but the company had a hiring freeze. She got into Finance by pure chance: When the freeze was lifted, the first job to open up was Financial Systems Analyst. Cornell applied and was hired.

She did not realize until after she left AT&T that during her time there she “developed skills that could be used anywhere: leadership, multitasking, process design, execution, project management, influencing, problem solving — all applicable to be successful as a Finance leader,” Cornell says.

Still, it takes a particular type of individual to build a career on the opportunities presented. Cornell needed to leverage her hard work and every bit of networking; furthermore, she had to develop teams to help her “get the right things done,” as Peter Drucker put it, describing the archetypal effective executive.

When she moved into her Corporate VP – Global Financial Planning & Analysis role at Covance, “it just so happened I had 365 people in my group. That was the inspiration for [taking 365 days and] meeting literally everybody [live or by phone]. In my prior jobs, I always made it a point to talk to a lot of people. The 365 went above and beyond. It helped me understand them as individuals, what their challenges were, what I could do to help.”

And then she shifts to a more personal tone, speaking about helping fulfill the aspirations of people who have worked on her team. “I think people tend to pigeonhole other people,” she says. “They think, ‘Oh, you’re in Finance, you don’t care about people things.’ ” But she does; she was a psych major, after all. She says she has spent “a ton of time with people talking about what their career aspirations were, about how do you even think about a career plan. I created my own template on how to do that and walked people through it.”

In her own career, she says, she was fortunate to have “great internal teachers who were willing to answer my million questions.” But learning answers to questions isn’t enough. She had to prove herself again and again as she moved through the career path she had envisioned.

And she’s still learning. “I do a kind of self-assessment every day.”