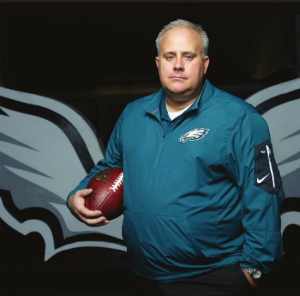 THE CFO OF THE PHILADELPHIA EAGLES HAS HELPED THE NFL TEAM GROW INTO A $2.4 BILLION ENTITY, BY MANAGING FINANCE, OPERATIONS, RISK—AND THE TWIZZLERS FOR TAYLOR SWIFT’S DRESSING ROOM

Frank Gumienny, Senior Vice President and CFO of the Philadelphia Eagles and Lincoln Financial Field (the team’s home turf), can sleep at night in spite of the fact that he knows Eagles business decisions are sometimes not good business. There’s a through-the-looking-glass aspect to the role he plays, where keeping to a budget is never going to happen, and the interests of football will always trump concern for the bottom line.

“We’re not a real business. We’re almost a business,” says Gumienny on a recent afternoon during the 2015 Eagles season. He delivers a similar line to new members of the accounting and finance departments he oversees. They blink and laugh, but Gumienny isn’t joking. The team is solvent; the franchise healthy. In fact, according to a Forbes Sept. 14 article, “The Most Valuable Teams in the NFL,” the Eagles rank ninth in worth, at an estimated $2.4 billion. Apparently good fiscal judgments contributed to that standing in the top third, but Gumienny says that decisions are not always made with an eye to the financial benefit. “We don’t make the same decisions you’d make if you were running a business because we’re also running a football team.”

A player might need a knee brace — like former quarterback Michael Vick, who sustained a knee injury during the 2012 season — and a brace can cost $50,000, says Gumienny. “It was never budgeted for, never contemplated that we were getting it, but if we believe it can help us win, we order it.”

Gumienny says unanticipated spending requests “happen every day.” Last September, Pope Francis arrived in Philadelphia, causing the Eagles’ game plans to change. The team was scheduled to be out of town, playing the New York Jets that Sunday at MetLife Stadium in East Rutherford, NJ. Traffic in and around Philadelphia, however, was forecast to be snarled all weekend because of the Pope’s visit, so the Eagles turned Thursday into a travel day, staying away from home three nights, and incurring two nights’ unbudgeted travel expenses. “Thanks to the Pope, we won the game,” says Gumienny, though the balance sheet needed redemption.

“In most businesses people are held accountable to their budget, whereas here, if I said that I was going to be a million dollars over budget, but we won all 16 games, everyone would be totally happy,” says Gumienny.

Because the organization is not really a business, the unbudgeted items get dealt with so they don’t weigh down the debits side of the ledger (“We just hide it”). All joking aside, he knows there will be income to cover unbudgeted costs, as he has a few ways to replenish the coffers (some examples follow). On the stadium side of the business, Gumienny can deal with fiscal probity.

Gumienny, 43, started his career at Price Waterhouse and became the Eagles’ first-ever CPA when he was hired in 1997. He worked his way up from accountant to controller to director of finance, and took the chief financial officer spot in 2012. Besides accounting and finance, he oversees human resources, ticket sales, IT, guest services, and merchandise. 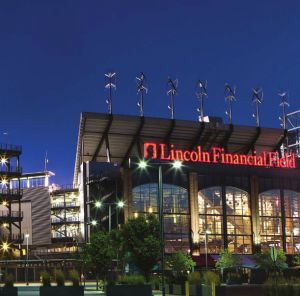 As to those coffers that need refilling: The Philadelphia Inquirer reported on June 17, 2015, that Taylor Swift, the 25-year-old country music superstar from Wyomissing, PA, filled Lincoln Financial Field “with 50,000 of her closest fans in the first of back-to-back sellout shows.” Actually, the person who filled the stadium was Gumienny, who negotiated the terms of Taylor’s appearance, even dealing with Taylor’s parents and her management team. He books all the concerts and events at Lincoln Financial Field, called “the Linc” by locals.

With just 10 Eagles home games each season (up to 12 if the team makes the playoffs), Gumienny is always on the lookout for other events to bring spectators to the multimillion-dollar stadium. He has booked Swift, who has performed at the Linc five times, and country music singer-songwriter Kenny Chesney, who has sold out the venue seven times. He books crowd-pleasing soccer games featuring Real Madrid, Manchester United, and the U.S. men’s and women’s national squads. He brings in monster trucks, and in 2015 for the first time, the Marvel Experience, an 11-day superhero carnival enhanced with virtual reality — a big hit with kids and their parents.

Some of the bookings come through a partnership with LiveNation, a producer of live events. Others, “we go after,” he says. With some acts, it’s necessary to guarantee the artist a certain amount of revenue. The ticket price is a matter of negotiation, and so is the split between the artist and the stadium. “Every kind of event is a little bit different” and has a different cost model, says Gumienny. Besides the talent, there’s the cost of constructing a stage, which he looks to amortize by booking acts on consecutive days.

Gumienny would like to have the stadium full every night, “as long as it doesn’t interfere with football.”

The Forbes article on NFL valuations reports that one of the teams’ biggest revenue sources is broadcast television rights, worth $4.4 billion last season, split evenly among the 32 teams. But when Gumienny talks about how money is made by the Philadelphia Eagles, he stresses something the fans bring to the game. “Our business is all about passion,” he says. “We’re lucky enough to have an industry that people are super passionate about.”

Most of the team’s tickets are sold on an annual basis, with very few single-ticket buyers. Translation: Philadelphia’s fans are passionate and loyal. While some might think that gives the team a pass on trying to connect with supporters, Gumienny has a different take: “Luckily for us, we get to spend most of our time and effort trying to make those people happy and making sure they feel very valued.”

He says: “We’ve gotten the whole organization to understand that that connection is super important, and that this is what really fuels our business.” He is interested in anything that helps fans and the team connect. The Linc got a major renovation when it turned 10 in 2013, and among the upgrades, management installed Wi-Fi throughout and high-definition video boards, including two that are 27 feet tall; of those, one is 160 feet wide and the other, 192 feet wide. The additions cost $139 million, but they mean that in-stadium fans can watch the game on a second screen, while following Twitter and fantasy team stats, and messaging friends. (A big screen will also attract sponsors looking for premium positioning.)

“If [fans] feel connected and they love the team as much as we do, they’re going to come,” says Gumienny. He describes a passionate season-ticket holder who will never give up his or her seat, because being a fan and going to the games is not just what you do, but who you are. “If you never give up your seat, we’ll have a full stadium. And if we have a full stadium, that maximizes our revenue from a ticketing perspective.”

As a CFO as well as a fan, Gumienny is living on hopes of making the playoffs — both as a means to offset costs and because he loves to win. “Making money is not the primary driver. To most owners and people who run teams, winning is more important,” he says.

Engagement on Personal and Team Levels

“We look at ourselves as Philadelphia’s team,” says Gumienny, who grew up in northeast Philadelphia and attended nearby St. Joseph’s University. The divorced father of a 12-year-old son and a 14-year-old daughter, Gumienny is engaged to be married. He credits his late father for his work ethic. “[My father] pushed me really, really, really hard to show me what it’s like,” says Gumienny, who regularly works as long as necessary to get the job do 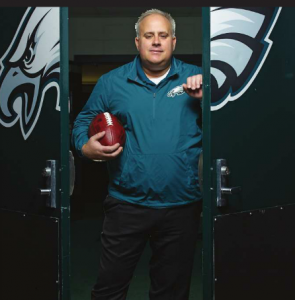 ne. His father’s family was in the concrete business, but “he pushed me because he wanted to make sure I went to college and did well.” Done and done.

Engagement, in the business sense, is understood and embraced. NFL teams are fairly sophisticated at using social media. About five years ago, the team invested in a new method of meeting fans offsite: merchandise stores. The first one opened in 2004 at the Rockvale Outlets in Lancaster, PA; a second one opened in Cherry Hill, NJ, about two years ago. Not only do the stores bring in revenue, but they’re great venues for fan engagement. “We do events out there, sending some players there from time to time with our mascot and cheerleaders,” says Gumienny.

The Eagles organization has made connecting with fans central to its culture, even providing Disney Institute training for department heads.

“If we do all the engagement and connection with fans right, the financial stuff takes care of itself,” says Gumienny. “It really does. If the people love the team and every week come out and are passionate, we fill the stadium.” And that’s not only good business; it’s good for football.