THE NBA SCORES WITH MEDIA, AND OTHER COMPANIES CAN TOO 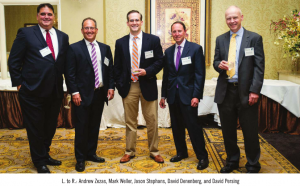 Media is at everyone’s fingertips. On YouTube, Facebook, Instagram, or Twitter, content can be distributed with the press of a button. As a result, every company is in the world of media, and the number of people watching a large company’s social media channels is staggering. The National Basketball Association (NBA) has more than 850 million Likes and followers combined across all league, team, and player social platforms.

The NBA’s focus on social media has helped the organization connect with millennials — the largest, most diverse generation in the U.S. The NBA and its stars are active users of Facebook, Twitter, and Instagram. Basketball is also popular on social media platforms like Vine, YouTube, and Snapchat, where short clips and highlights are shared.

“We put very large screens on the bottom of an elevator and played a video of an elevator falling. There was also a video camera to capture people’s reactions. It was a clever marketing campaign,” said Mr. Wingate.

Showing the Good You Do

Royal DSM is a global science-based company active in health, nutrition, and materials. A challenge the company has faced is that although it is well known in the Netherlands, where its global corporate office is based, the DSM name is not as familiar in the U.S. “As a result, we implemented a variety of public relations initiatives,” said Jason Stephans, Esq., Senior Counsel, DSM North America. “This was inclusive of a social media campaign by creating DSMTV News, available both internally and externally on YouTube.” Episodes focus on a different aspect of the diverse company every month.

For example, “DSM is heavily involved in causes like Vitamin Angels and the World Food Program. These are groups that help provide DSM-fortified food products to developing countries. Discussing this initiative via social media allows us to show that DSM is not just focusing on profit, but is passionate about making the world a better place. This social media campaign has generated a lot more attention for DSM, inside as well as outside the nutrition industry,” explained Mr. Stephans.

NBA Cares is the basketball league’s global community outreach initiative that addresses important social issues, including education, youth and family development, and health and wellness. “We used to have multiple different things we participated in, from reading programs to staying-in-school initiatives. With NBA Cares we have put them all under one umbrella in order to have a more consistent impact and to try to raise a collective social consciousness,” said Mr. Denenberg.

Social media is ephemeral, and that means you must have a strong website to serve as a permanent home. “A website can be a strong marketing tool,” said Jay Sabin, Esq., General Counsel, Grocery Haulers, a third-party logistics operator based inWoodbridge, NJ.

Mr. Denenberg responded that most millennials do not visit websites. They turn to social networks like Instagram and Snapchat to keep informed. “It’s a different world. Kids are not watching television the way we did when we were growing up, although thankfully, they’re still watching sports. There is very little appointment viewing anymore. They watch when they want to watch, and they are consuming our content on a variety of devices,” said Mr. Denenberg.

It’s not just millennials who have made that type of switch. Netflix, not exactly a millennial brand, has more than 65 million streaming members in more than 50 countries. “It is the fastest-growing stock this year,” added Mr. Sabin.

Not all the companies represented at the dinner have social media platforms. “We are an old-school business focused on bricks and mortar,” said Cindy Birnbaum Ronson, Esq., Vice President and General Counsel, Teterboro, NJ–based A&E Stores, Inc., a company that operates Strawberry, Pay/half, and Bolton’s stores. Its shops are in high-traffic areas like Grand Central Station in NewYork City. “We have some of the most beautiful mannequins in the city. People see our mannequins and they draw them into the store.”

Mark Goldberg, Esq., General Counsel, Bluestar Silicones USA Corporation, a fully integrated silicone manufacturer, based in East Brunswick, NJ, emphasized “the importance of a robust website.” In the case of his company, regulatory and product data sheets are posted on the site.

David Persing, Esq., Senior Vice President and General Counsel, New York City– based Metromedia Company, Inc., a media holding company, shared with the dinner guests his experience working for Major League Baseball in the 1990s. He asked Mr. Denenberg if the NBA has a joint-financing arrangement for its teams.

The NBA has a league-wide credit facility, said Mr. Denenberg. The facility is secured by the NBA’s national media revenues and other NBA-related assets, and allows participating teams to obtain favorable financing.

The NBA’s team marketing and business operations department, or TMBO, is responsible for developing, compiling, analyzing, and sharing among teams ways to drive franchise profitability. “We believe in the sharing of best practices,” said Mr. Denenberg. “Teams compete on the floor, but they don’t compete on the business side.”

Media helps build a market globally. The NBA operates on a global stage. Tweets, videos, and other posts are available in faraway places. Mr. Weller asked Mr. Denenberg about perceptions of the NBA in other parts of the world. “We recognize the global popularity of basketball and continue to look for opportunities to grow the game and our business,” said Mr. Denenberg. “We regularly play pre-season (and sometimes regular season) games overseas, and there is huge interest in our players and products,” he added. “There are millions of people watching our games in China, which is great, but there are other countries where we’re still trying to stoke interest. It’s hard to believe that in 1983, the NBA Finals were broadcast on tape delay. We are now broadcast in more than 210 countries live around the world.”

Jens Obermuller, Esq., Vice President, General Counsel, and Secretary of New York City–based Symrise, a global supplier of fragrances, flavorings, cosmetic base materials and substances, as well as functional ingredients, mentioned the popularity of cricket in India and Pakistan. “We are a little myopic here in the United States. The world is doing other stuff,” said Mr. Obermuller.

The NBA recently entered into a relationship with Tencent Holdings Limited, a leading provider of comprehensive Internet services in China. As the official digital partner of the NBA in China, Tencent will feature a record number of live games and deliver enhanced original NBA programming and highlights, including pre-season and regular-season games, NBA All-Star, the NBA Playoffs, The Finals, NBA Summer League, and the NBA Draft, through personal computers and mobile devices. 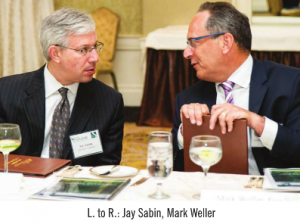 A star of this year’s South by Southwest conference was Meerkat, a live-streaming video app. Another live-streaming app, Periscope, was acquired by Twitter in January. These apps are impacting televised sports. Take the highly anticipated boxing match between Floyd Mayweather, Jr. and Manny Pacquiao, which sold for $100 on pay-per-view. Many in attendance took matters into their own hands and held up their phones and streamed footage for free to the world via these apps.

“Our media rights are very significant to us, so we’re keeping a close eye on this new streaming technology,” said Mr. Denenberg. Mr. Wingate compared this new technology to music streaming. “We will have to outlaw it or capitalize on it,” he said.

Mr. Stephans asked if the NBA gets involved with the social media platforms of its players. “Our players don’t wear helmets and are easily identifiable. When they connect with fans it benefits us, so we think it’s great that so many of our players are adept at social media,” responded Mr. Denenberg.

By 2016, there are expected to be more than 2 billion social media users. “Snapchat, Instagram, YouTube, Facebook — that’s where millennials are consuming content. You can’t ignore the fact that they are on their phones, laptops, and iPads simultaneously, so we are very focused on that. … We’re out there experimenting with many different platforms to figure out the best way to reach a diverse audience,” said Mr. Denenberg.

Mr. Wingate agreed. “My son played Little League baseball, which he enjoyed, but it’s hard to get him to watch an entire game on television. He is fine with a video game. My generation is the TV generation, his generation is the interactive generation. They want to be involved in it, not just watch it.”

Looking Toward the Future

What does the future hold for the NBA? “Our calling, which we take very seriously, is to ‘Compete with Intensity, Lead with Integrity, and Inspire Play.’ So we’d like to be true to that calling, continue to stress social responsibility, fitness, and the global nature of our game,” concluded Mr. Denenberg. Other customer-focused companies, take note.