WHAT COMPANIES MUST DO TO RAISE CAPITAL

Going after private equity funding was the focus of a CFO Studio Executive Dinner held at Blue Morel in Morristown, NJ. Luke McKinnon, recently having served as Chief Financial Officer of a global engineering services company, was the discussion leader.

“Going out and raising priv

Successful private equity firms have financial controls in place that focus on the basics of performance— revenue, operating margins, and cash flow. McKinnon was tasked with finding a long-term minority-interest investor for the global engineering services company he was part of, one who would be willing to have a seven- to ten-year relationship. “We found three firms interested in this length of term. Although they are called private equity, many of those investment companies are more family-run type places,” explained McKinnon.

The company McKinnon was with was global in nature, with operations in countries including Afghanistan, Iraq, Sudan, the Congo, Vietnam, Thailand, and Indonesia. “At one point, I had 2,000 bank accounts around the world,” said McKinnon.

This wasn’t the only challenge the private equity firm had to contend with. “They are focused on Day Sales Outstanding (DSOs) and cash flows,” said McKinnon.

This comment led to a discussion about DSOs. Bill Baldwin, Chief Financial Officer, Kepner-Tregoe, Inc., a Princeton, NJ–based capability development and consulting solutions company said, “Our most troublesome country is India, whether it’s with a major IT company or another Fortune 500 client that we deal, in India it’s a very, very long payment cycle.”

Delayed payments have become the norm. Historically, government agencies are known to be sluggish. “We provide engineering and consulting services to the government sector, mainly municipalities and counties, and they’re always dealing with funding and processing issues, so we’re probably at 115 to 130 days,” said Michael Dentici, Senior Vice President, Chief Financial Officer, T&M Associates, an engineering, planning, and environmental consulting firm based in Middletown, NJ.

Procurement and finance are becoming more interwoven than ever. “We’ve been involved in deals where the client’s procurement executives say, ‘We require 60- to 90-day terms, to which we counter that our prices will go up 15 percent, to which the client often agrees. This makes absolutely no financial sense, because the 15 percent fee increase is much more than the cost of money. There is a disconnect in the performance systems and communications between procurement and finance when this happens,” said Mr. Baldwin.

Peter Pfreundschuh, Vice President Finance and Chief Financial Officer, Immunomedics, Inc., a Morris Plains, NJ– based biopharmaceutical company, said not only are payments in each country unique, but they are ever changing. “When I first audited payments with some French companies, we were seeing 360-day payment cycles. A law was then enacted in which companies were required to pay on time.”

John McAndris Jr., Chief Financial Officer and Vice President of Finance, JJM Consulting, LLC was previously in charge of Latin America for Pfizer/Wyeth. “Venezuela is a country that is very tough, as many companies there never release money. You have to go to the government to get a special dispensation to get the money out of the country,” he explained. 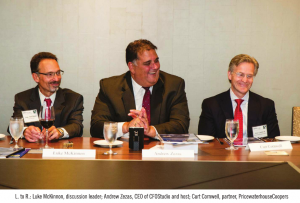 This discussion put things in perspective for Andrew Wood, Chief Financial Officer, J. Fletcher Creamer & Son, Inc., a Hackensack, NJ–based contractor. “About half of our work is with government agencies and the other half is with private companies. Most of our work is with utility companies, which are semi-regulated. I used to complain…until I heard you guys. Our DSOs are in that 65- to 68-day range, which is not that bad, compared to all of you,” said Wood.

Selling accounts receivable is a standard form of managing cash flow and is something with which Gunther Mertens has experience. Mr. Mertens is President, North America Region of Elmwood Park, NJ– based Agfa Corporation, the North American arm of global imaging leader Agfa-Gevaert N.V. “Our DSO is actually 45 days, which is good. But what we see is that some bigger companies are asking us to offer extended-payment terms beyond the standard 30 days, in exchange for a supplier-side financing program,” said Mertens.

As an example, Mertens explains that if a customer owes Agfa $1,000 and payment term is 60 days, the customer’s bank will pay Agfa $995 after only 10 days. The customer in turn will pay his bank $1,000 after 60 days. “So the customer achieves his goal of improved cash flow by keeping his cash 30 days longer,” said Mertens. “The customer tries to make this palatable to Agfa by not deteriorating vendor’s cash flow by 30 days and instead improving vendor’s cash flow by 20 days. But there is a cost to the vendor similar to if the vendor were to sell its receivables.”

Prioritizing revenue cycle issues was of paramount interest to most CFOs at the CFO Studio Executive Dinner. “If you don’t bill them, they don’t pay. The start-up time is in the invoice. If you change the terms of your agreements, so that your billing point is earlier, you can actually move forward the payment,” said Barry Lederman, Chief Financial Officer, Whippany, NJ–based Halo Pharmaceutical, a contract development and manufacturing organization that provides scientific and development expertise.

A steady billing cycle is key to success. “When I was in professional services, one of the things we changed right away was, instead of billing at the end of the month, we started billing every two weeks,” said Michael Roth, Chief Financial Officer, Chief Operating Officer, Beefeaters Holding Company, a North Bergen, NJ–based manufacturer of dog treats. “We dramatically increased cash flow by billing major customers every two weeks.” 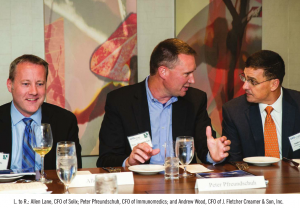 “One of the most important lessons for everybody is to get the right people to invest,” said Ed Schultz, Principal, of New Jersey–based Highlands Business Group, a consulting firm. “It’s important to make sure the due diligence is right, that the fit is correct, and that you’re not going to get beaten up. A lot of deals go south because the private equity firm didn’t listen and didn’t gain a solid understanding of the business. Sometimes, they only want to do the deal and aren’t thinking about who they’re investing in.”

The correct fit is important. “There are two things to consider: style and strategy. Does everybody agree about what the company is going to look like in the future? Is there knowledge of the industry and can you really get along with these folks? What is their style going to be on a tactical basis, too?” ponders New York City–based Curt Cornwell, Partner, Transaction Services, PricewaterhouseCoopers, a leading professional services network, and a CFO Studio Business Development Partner.

Andrew Savadelis, Chief Financial Officer, Angion Biomedica Corporation, a Uniondale, NY–based biopharmaceutical company, pointed out the uniqueness of the arrangement made at the company McKinnon had worked for. “It’s not private equity in normal terms. It sounds like it is more Venture Capital than Private Equity. VCs tend to take a longer-term perspective, but they also look for higher returns on their capital gains.”

Many agreed with Savadelis. “I concur, as the VC model typically includes raising a fund that is very industry-centric,” said Gregg Kam, Chief Financial Officer, Sonneborn, a Parsippany, NJ–based manufacturer and supplier of high-purity specialty hydrocarbons.

When preparing for private equity, sell-side reports have become a trend, according to PricewaterhouseCoopers. A selling company has an accounting firm come in, prepare a quality earnings analysis, a debt analysis, as well as details on trends being experienced, and that book goes out.

Allen Lane, Senior Vice President and Chief Financial Officer, Solix, a Parsippany, NJ–based provider of program administration, eligibility determination, and call center services, said, “I’ve been reading through a lot of these recently. There is a definite marketing slant on the part of the seller in these documents. They are a nice road map to begin your discussions with, but you still have to do a full due diligence review.”

Mr. McAndris of JJM Consulting said sell-side reports help from another perspective. “You can steer the course of where you want the buyer to look. You’re controlling the conversation,” he added.

In some instances, these procedures are not necessary. “We were headed down the road of going public and [our investors] came along and made us an offer that was about 50 percent above our projected IPO price. That’s what we call a no-brainer,” said Bert Marchio, Chief Accounting and Operations Officer, Edge Therapeutics, a Berkeley Heights, NJ–based clinical-stage biopharmaceutical company.

There are cases where acquirers don’t see the forest for the trees. “Every due diligence sale that I’ve been through, some companies got involved and looked at minutiae that didn’t really mean anything. For example, ‘I see you spent $22,000 on a particular purchase. What was it? Oh, it was a Christmas party,’ ” said Mr. Kam. “They often miss the big picture about the business in due diligence, focusing on immaterial items.”