HOW CFOS FOR TAX-EXEMPT ORGANIZATIONS CAN MITIGATE VARIOUS RISKS 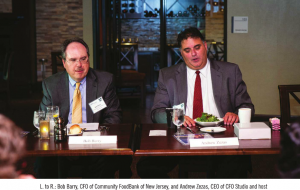 Mr. Barry noted that IRS Form 990 is a valuable reputational-risk mitigation tool. It allows tax-exempt organizations to provide would-be donors not only with information about their finances, but also with insights into their mission and programs. “That form is something that we control. That is our document. Nobody sees it until we review it, understand it, and know what the implications are,” he said. The IRS allows any number of pages of supplemental information. Mr. Barry said that the FoodBank’s 2014 Form 990 supplement ran to 127 pages.

GuideStar and Charity Navigator, whose missions are to help donors evaluate charities before giving, receive the 990s from the IRS and use information from them to rank charities. A key point, said Barry, “is the first page, line 19, net excess/net deficit. I can tell you from my experience that the deficit is harder to deal with than the excess, because donors really don’t want to see money going to waste.”

Net excess is a potential difficulty for William Curnan, Chief Operating Officer for Ewing, NJ–based Advancing Opportunities, which provides services to individuals with disabilities. He said that when he files the Form 990, he adds an MD&A (management discussion and analysis) letter to explain that the organization’s mission involves building residences so that people with disabilities can live where they choose. He needs to explain this because the housing that Advancing Opportunities builds under the government’s Olmstead grants program looks on paper to be an asset. However, “I’m never going to sell it. I’m never going to leverage it. It’s deed restricted. I can’t do anything with it, but on paper, it’s a [large] asset,” said Mr. Curnan.

Form 990 is not required of religious organizations. John Balzano, Chief Financial Officer for Sisters of Charity of Saint Elizabeth, NJ—which is engaged in educating the young, caring for the sick and the elderly, and helping the poor—does not file a 990. He stated that a CFO, simply by his or her own reputation and knowledge, takes a lead role in answering questions about finances, whether or not it is a tax-exempt entity. “ACFO brings a sense of confidence and accountability that those financials are right. Whether you’re showing huge profits, or huge losses, you just need to present financial data properly and explain the results in the MD&A letter.”

Peculiarities to Report on 990s

Timothy O’Donnell is Chief Financial Officer for the International Neurotoxin Association, composed of physicians from all over the world who meet every two years to share information and the results of their work in promoting different uses for neurotoxins (treating migraine headaches and cerebral palsy, as well as erasing wrinkles with Botox). O’Donnell’s dilemma is that biennial meeting schedule, which means revenues spike every other year. “Our 990 looks very unusual,” he said, because there are swings in both assets and activity from year to year “due to the nature of the organization’s meeting.”

Early in her tenure at Family & Children’s Service of Monmouth County, Anna DeJesus, Chief Financial Officer, said she found it necessary to pull back on expenses because the organization was losing money. “We wound up with a slight profit [and for] the next three years, that profit grew, but we also did a new strategic plan. A high priority on the strategic plan was to build a [six-month] reserve.” She added, “Our programs are significantly funded by government grants, which can be cut at any given time. The reserve was extremely important.”

Ms. DeJesus said that she posts the 990 on GuideStar every year. “We’ve shown three years of steady growth, and our development department has seen a substantial increase in the number of contributors. Donors feel very confident in what we’re doing.”

“Because they believe in the mission, obviously,” said Mr. Balzano.

“That’s correct, they believe in our mission,” said Ms. DeJesus. That mission includes providing Reading Buddies to foster literacy skills for children in underserved public schools, Adult Protective Services to intervene on behalf of abused, neglected, or exploited adults, and 11 additional human service programs that reach more than 7,000 at-risk individuals and families annually, without including the organization’s thrift shop clients. “But there is no mission without money… no margin, no mission. Even Mother Teresa understood that.”

GuideStar and Charity Navigator look at the ratio of money that goes to General and Administrative (G&A) expense versus money spent on programs. According to Mr. Barry, no more than 12 percent should go to G&A. Also, Charity Navigator “looks at your development costs as a function of how it relates to money raised,” he said.

Both Mr. Curnan of Advancing Opportunities and Ms. DeJesus rely heavily on funding from government grants, and because of the nature of some of those grants, the organizations’ total G&A percentage is higher than 12 percent. Mr. Barry said that reporting of G&A on the 990 is totally separate from reporting that goes to the grantor. “I didn’t really appreciate how much [the rating organizations] looked at the 990 until we had a meeting with Charity Navigator. [The 990] is really what keys their whole analysis, and that is what donors look at now too.” 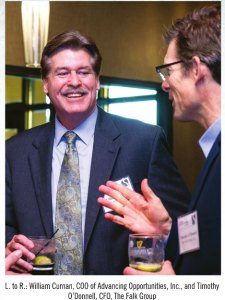 Eileen Black, Controller with Stevens Institute of Technology, a private research university in Hoboken, NJ, files a 990 but does not include MD&A information. Instead, the university relies upon its development department, other leaders, alumni, and students “to generate excitement about the mission and what we’re accomplishing.” The university has received national and worldwide recognition in publications. Also, the research in which Stevens’ professors and students are engaged —and its contribution to technological innovation— is also an important part of the university’s mission and has contributed to the reputation that Stevens has established. “This recognition has been a significant factor in rising contributions,” Ms. Black said. “Other nonprofits should consider using media, social media, or other avenues to enhance the excitement about their mission, not just the Form 990.”

Mr. Balzano, who has worked in both the public and nonprofit sectors, responded with a comparison of for-profit financial planning to tax-exempt planning. “When you create a [corporate] plan, people spend so much time on the expense side of it. ‘What’s my travel budget?’ ‘What’s my utilities?’ ‘What’s my insurance?’ [But in the tax-exempt sector,] you’ve got to spend your time on the revenue side of the plan. The Sisters of Charity sponsor two Academies and a College, and in talking with them, I always stress the importance of the revenue side. I say, ‘What are you doing to raise revenue and what are your metrics?’ They have their donors and their fund-raising events, but [those sources are] generally not enough to achieve their mission. Unless you build into people’s minds how to get funding, how that works, they tend to focus more on, ‘How can we cut costs here?’ You can never save yourself rich. That’s just not possible.”

“That’s the Howard Johnson’s model,” said Andrew Zezas, publisher of CFO Studio magazine and host of the event. “The story I’ve read is that decades ago, the CEO of Howard Johnson’s — the company that invented and originally succeeded at the roadside hotel-and-restaurant chain concept —eventually focused little on top line. It was all ‘cut expenses, cut expenses,’ at the expense of everything, including quality and service. The shame of it all is, when was the last time you ate or stayed at a Howard Johnson’s?”

The salary of the tax-exempt organization’s CEO must be reported on the Form 990, and becomes public knowledge quickly. The form was revised in 2008 to require such organizations to report on the process of determining compensation. “Whether the [compensation committee is] making an adjustment for a bonus or whatever, you have to document what the change is and why and what data was used,” said Mr. Barry.

“We had some lean years during which the CEO did without pay, and I applaud her for doing that,” said Martin Mussman, Treasurer, New Jersey Coalition for Inclusive Education, which helps create neighborhood schools where children with disabilities and learning differences are welcomed as classmates and empowered to succeed. “So we negotiated a 10-year payout to make up for that.” But as a result, the Form 990 does not tell the whole story about that CEO’s compensation.

Some attendees mentioned that their executives expressed alarm that their salaries are publicly available. The salary of the CEO is, most agreed, a matter of great donor interest. People go to that part of the 990 and ask, “‘Is it justified?’” said Mr. Balzano. He added, “You should never be embarrassed about what you make if you’re really making a contribution and fulfilling your mission. But I find it interesting how so many tax-exempt leaders feel very sensitive about that information.”

“I think there’s that perception that we should be doing this out of the goodness of our hearts,” said Suzanne Schwanda, Senior Vice President of Finance and Administration, Special Olympics New Jersey, which provides year-round sports training and athletic competition for children and adults with intellectual disabilities.

Other Types of Risk

Besides reputational risk, the group discussed operational risks, including the risk of recession and the risk of having to sell real estate at an inopportune time. On the latter point, Mr. Zezas said, “The time to sell real estate, especially in sale-leaseback transactions, which are more structured finance than real estate transactions, is not when the organization is experiencing financial challenges. It’s the same approach as deciding when to borrow from a bank. The best financing terms, whether at a bank or in a real estate transaction, can most often be achieved when your organization is performing well. That’s the time you get the best terms, because your risk profile is more advantageous to banks, lenders, investors, and others.”

Another aspect of operational risk is being too dependent on funding coming from one source, such as the government or a foundation. “We worked really hard back in 2008 to diversify our sources of funding,” said Ms. Schwanda. “We actually expanded the number of special events we do, and gave participants incentives to reach out to friends and families to help sponsor them to reach different levels. That greatly increased the revenue we received from these fund-raising events.”

After nearly two hours of conversation, it was clear that the group members were experts at what they did, which was to facilitate people doing good and delivering services to others. “One of the challenges that all of you folks have in common is that you’re very often working for organizations that are short on resources, short on business acumen at some levels, and long on good intentions,” said Mr. Zezas. “Where strong leadership is unavailable, an organization may miss important opportunities.”

Mr. Barry described a conversation that he’d had with the CFO of a major international corporation who told Barry, “‘Your job is much harder than mine.’ That felt good,” said Mr. Barry. At tax-exempt organizations “we’re in the trenches. We deal with substantial risk without big staffs and dependable revenues.”