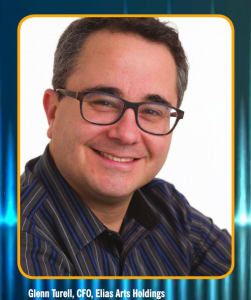 Glenn Turell works in an entrepreneurial environment. As CFO at Elias Arts Holdings LLC, his role includes looking at potential partnerships, mergers, and acquisitions for a company whose motto is “A more powerful way to use music.”

Turell enjoys the TV show Shark Tank, and when he attended the CFO Innovation Conference & Awards last May at MetLife Stadium, he eagerly took a seat in the audience for the “Piranha Tank” session, where angel investors would judge the viability of four business ideas being pitched.

After that session, he sought out the presenter of one particular pitch for funding, Mihai Dinulescu, and a partnership developed.

Elias, with offices in New York and Los Angeles, composes and arranges custom music for a wide variety of audio uses, including commercials, TV shows, and films, and also houses a world-class library of already prepared music and sounds available for commercial licensing. The company also creates sound identities, such as the “We Are Farmers” audio logo, or the tinkling tones that accompany Columbia Pictures’ logo at the start of that studio’s films. “I’ve always been interested in the effects of music on the brain,” says Turell. Once he and Dinulescu began talking, both of them became intrigued by the possibilities of an alliance between Elias and Sonzia, a company in its embryonic growth stage that Dinulescu and his partners incorporated in December 2014. Their initial work is helping children on the autism spectrum.

Sonzia’s core technology is low-cost, large-scale touch screens that enable children with certain sensory disabilities to access and use the digital world. “We’re a software company that happens to make hardware because no one was making it in a way that was accessible and durable,” says Dinulescu. “But we’re really a software company, and we’re trying to provide a safe environment for people to develop and learn.”

The company, which is based in Boston, is creating immersive rooms with floor-to-ceiling projections to help teach young children with autism to, for instance, dine out in a restaurant or cross the street safely.

Someone with autism may become overwhelmed or distressed by loud or sharp noises. Sonzia has therefore seen the need for sensory-friendly versions of the sounds it uses in its interfaces. “If you’re trying to teach someone to cross the street, it’s important to have sounds that signify danger, but you don’t want to make the activity terrifying,” says Dinulescu.

The creative team at Elias is now developing sounds for Sonzia that would be less disconcerting to the children. They are bringing out audio tones’ softer side—which is in fact “A more powerful way to use music.”

The companies have what Turell calls “a nice back-and-forth.” Sonzia has been working with experts at Purdue University, asking, “How could the screeching car sound be modified to be more sensory friendly?” The team at Elias then creates the sound, and it goes through a couple of iterations before, says Dinulescu, “we end up getting something that you would recognize as a car screeching but it wouldn’t be disturbing.” A balloon popping would sound more like a bubble popping.

When Dinulescu met Turell, he realized that in partnership, the two companies could expand the uses of these sounds. Sonzia will work on an SDK (software development kit) that will allow other companies to use Sonzia’s library of sounds, with accompanying visuals, to develop their own applications for people with sensory disabilities. Elias will work with Sonzia to develop the library of music and functional sounds, while also providing the library infrastructure and administration. That company is now building the separate sensory-friendly library that, for instance, video-game producers might tap into so as to expand into the demographic of gamers with autism. 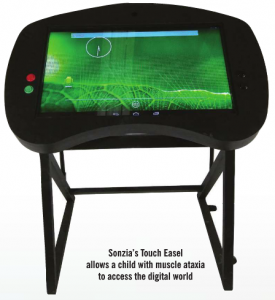 Turell came back to his New York office, after his encounter with Dinulescu at the CFO Innovation Conference, excited about the many possibilities of working together. “I always thought that for a company of our stature, it would be great to participate in this field” — that is, the space where music intersects with helping people who have certain diseases. “Music has already been proven to have a positive impact on healing, but there is much more that can be done to expand the utilization of audio within the health field,” he adds. He liked the idea of using music for a higher purpose.

Others in his company, from the chairman to the creative staff and the producers, Turell says, were enthusiastic about the idea. Not only is it stimulating to be working on something different, but “all of a sudden we can do something that’s going to have a much different benefit and can directly help many, many people.”

In the first weeks after their partnership got under way, Sonzia provided a list of “experiential stimuli” they needed for their interfaces: a balloon popping, an electric razor running, cars, and sirens, among them, as well as some music and ambient sounds, like rainfall.

Sounds can be visualized on a sound file, where they exhibit sharp pulses that Elias’ team, with some training from the clinical experts, softened. In this way, the sounds would be less distressing for an autistic person to hear.

The partnership agreement has the two companies sharing development costs and revenues. At this point, the agreement is open-ended. The companies are focused on autism for the initial period, but there are various disabilities for which a sensory-friendly library could be useful. “We’re working together in continuing to build this,” says Turell. “The library will have applications not only for autism, but also for other disabilities such as Parkinson’s and possibly Down Syndrome, among others.”

The partners hope someday to see large companies recognize the need to reach people with sensory disabilities. Not only is this a growing population (the Centers for Disease Control cites studies showing that one in 68 U.S. children has an autism-spectrum disorder and that the prevalence of the disease grew 119 percent from 2000 to 2010), it is underserved in terms of available leisure activities.

Turell and Dinulescu hope that by identifying and modifying sounds that are distressing to the autism population, they will make it possible for autistic children to interact rather than retract from society and certain types of media. There may someday be major motion pictures dubbed for autistic viewers, and video games that use sensory-friendly sounds.

Says Turell: “We’re going to continue to build this partnership and explore many other opportunities to help people in the future.”